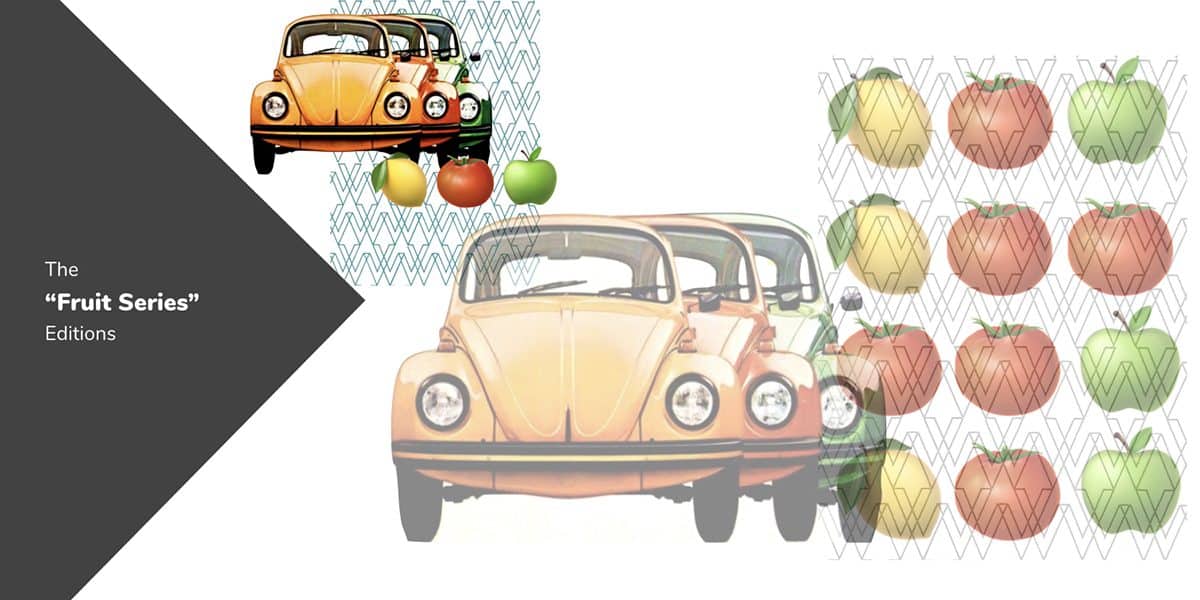 Context: In a similar way to the “Drei Käfer auf Extra-Tour ” Edition Volkswagen used a multi-model line as the base models for this Group of Editions. Although this time they were never marketed all together.

Non of these models however specifically appear in the Volkswagen parts system listing of  Sonderaktion “S” models.

The Fruit Series Editions derive their name from the three paint colours used throughout the six separate Editions that the Group comprises of.  These were Zitronengelb / Lemon Yellow, Tomatenrot / Tomato Red and Apfelgrün / Apple Green

The use of these three colours on Beetle saloons was restricted to the various Editions within the Fruit Series Group . Whilst Zitronengelb was a long running Volkswagen colour, Tomatenrot was a three year only colour and Apfelgrün is one of the rarest SEB colours of all  thanks to it being a one year only paint finish. As with all the SEB paint finishes that were not to be found on standard production model saloon Beetles the plastic beading between the body and wings of the Fruit Series models was black.

The Fruit Series used a duo of Beetles as the base models: spartan 1200 and luxe 1300. What was most significant is that it included a 1600cc version of the 1300 Beetle – a “VW 1300 S”. This was a short lived Beetle model that lasted just two model years in production and was only ever delivered to a restricted number of markets in standard form. A significant proportion of 1300S production appeared as SEB versions. In this configuration the cars fitted with front disc brakes and 1584cc engine which, on some versions was mated to an uprated 3.875:1 final drive gearbox as opposed to 4.375:1 .

From a visual point of view this Group of Editions continued a theme set by the Sparkäfer of the  “Drei Käfer auf Extra-Tour ” Edition: a 1200 model Beetle fitted with the larger 1303 style rear lamp clusters and Euro bar bumpers neither of which were standard fittings on that model until the following (1974) model year. Like the “Drei Käfer auf Extra-Tour ” Edition Sparkäfer the Fruit Series versions based on the 1200cc Beetle also came with black trim accent. By adding the 4½J x15 (Lemmerz) “GT” style sports wheels into the package Volkswagen set a fashion style that was to be incredibly successful  throughout 1973, ’74 and ’75.

The 1300S SEB models also benefitted from the installation of those larger rear lamp clusters differentiating them from the standard production 1973 1300 Beetle which retained the earlier “tombstone” style of lamps until the 1974 model year.  In contrast to the black trimmed 1200 Fruit Series models the companion 1300S and the 1303S versions retained a trim finish of their contemporary standard model counterparts enhanced by special needlecord upholstery facings.