(Marathonblau was a unique SEB colour in 1972 but had become a standard model range colour for the 1303 for the 1973 model year in Europe. )

We believe that a core set components existed for this Edition as a “Z” pack. However because of the extensive variation in versions sold throughout Europe combined with at lot of production information still unknown to us we cannot be certain which “M” options were gathered into it.

What we do know is that a large variation of factory fitted “M” options were included on the Marathon / Weltmeister Beetle Editions according to the market they were sold in.

In addition front fog lamps were fitted to cars for Belgium

Context: The Edition comprised of one single, unique, paint colour and wheel combination package that varied in detail according to the country of sale. The paint colour code, at this stage, was an unusual four-digit code of 9589 instead of the more usual two-digit repeated used in subsequent years as 8989–  as shown in the1973 Käfer 1303 brochure.

They were delivered complete with a commemorative folder ‘History in the making’, a small certificate, keyring and souvenir gold coloured medallion with the inscription ‘Der Weltmeister 1972, Wolfsburg, Germany’ and a side view of the Marathon.

Over 6000 ( #6857 seen on one medallion) Marathon / Weltmeisters  were produced by Volkswagen AG at Wolfsburg (Germany) and  D’leteren at Brussels (Belgium).

We understand that 1,500 World Champion Beetles were imported into the UK, with shipments arriving alongside the first deliveries of the K70 model. Main dealers were allowed six cars each while other agents got three.”On the road” price amounted to £949.52 including tax, delivery charges, number plates and current rate of British Road Tax at the time of £25. 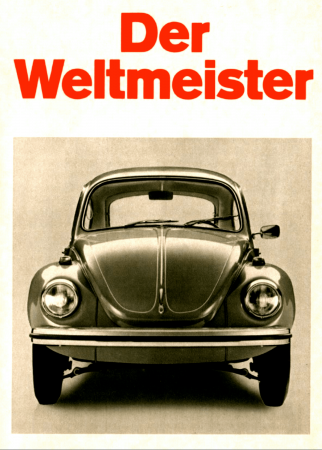 Volkswagen AG did however issue an 32 page, A5  sized brochure format, publication (numbered 24011.708,  dated 2/72) in Germany to commemorate the Beetle becoming world champion, or ‘Weltmeister’. It contained a resume of Beetle history in black and whiter photographs and text with a splash of red on the front cover proclaiming “Der Weltmeister” with a head on photo of a 1302 in familiar contemporary Volkswagen advertising and brochure style .

Introduction to the Champion Group of Editions.