The long awaited Solido Salzburg Rally Beetle is now at last to hand and originates from the same base model as the 2016 offerings of the GSR and Weltmiester 1974 reviewed as SMR 002 and 003.

I see no point in plagiarising words to give some background to the formidable Porsche Salzburg Beetles of which this Solido is a representational example when Volkswagen Motorsports own website already does it very well:

“Seven litres – that is the almost unbelievable amount of engine oil contained In each of the massively modified racing engines in the legendary 1302 and 1303 Salzburg Beetles’, which would turn the model into a rally Icon at the beginning of the 1970s. But that’s not all: predominantly modified on the camshaft, with enlarged outlet and inlet valves, plus carburettors from the Porsche 912 and later from the Porsche 904. the black and silver racing Beetles from Porsche Salzburg catapulted the modest, spherical-shaped Volkswagen into sporting realms.

The story began in 1965 when Louise Piech. the mother of Ferdinand Piëch and head of Porsche Austria, gave her permission for an in-house motor sport division to be set up in the hope that any potential sporting success would have a positive effect on the image and reputation of the Volkswagen and Porsche marques. Racing sport chief Gertiard Strasser, engine wizard’ Paul ‘Pauli’ Schwarz and eight carefully selected employees successfully set about giving the Beetle real sporting genes.

From a purely visual perspective, the Salzburg Beetles were a real delight in the style of the time – and unmistakable: with silver metallic paint and sporty matt-black bonnets, the powerful Alpine Beetles also bore a red and white strip representing the sovereign colours of Austria. There was also an imposing (and effective) battery of auxiliary headlights mounted on the front bumper.

Pauli’ Schwarz took care of the technical side of things. He initially ordered a dry sump lubrication system for the Salzburg Beetles and increased the engine oil capacity from 2.5 to the aforementioned seven litres. As such, there was no risk of the fast racers suddenly having no lubrication when cornering at high speed with high load change. The engine was enlarged to the cylinder capacity limit of 1,599 cc using oversized pistons. Polished cylinder heads increased the compression ratio from 7.3 to 9.1:1. The inlet channels were widened; the size of the inlet valves was increased from 35.5 to 40 millimetres. On the outlet side, the channels were polished, but the valves were left unaltered. The piston rods were balanced and the crankshaft was finely balanced. Fuel was initially mixed using two Solex twin carburettors from the Porsche 912; later on using two Weber 46 IDA carburettors from the Porsche 904.

To crown the engine conversion. ‘Pauli” Schwarz polished the camshafts in secret- allegedly in his private, soundproof cellar. In addition, there was still room behind the slotted front panel for an oil cooler from the Porsche 903. All the effort was rewarded with 120 to 128 hp at 7,000 rpm from the 1600 Beetle engine and enough steam from 2,000 rpm.

Especially between 1971 and 1974, a total of eleven Salzburg Beetles got properly Involved in the international rally scene: 15 overall wins – including victory in the Austrian state championship in 1971 and 1972, the Jänner Rally (rally Beetles finished in places one to five, with places one to three occupied by Salzburg Beetles) and the overall win in the Rally dell’lsola d’Elba in April 1973, an event that was part of the European rally championship – turned the silver and black racers into legends In 1974, the year of the energy crisis, Beetle production ended in Wolfsburg, and the water-cooled models began to prevail. The sports division of Porsche Salzburg closed its doors. Many of the original Salzburg Beetles are still in existence today and can be found in the hands of enthusiasts.” 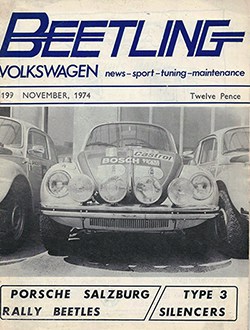 And so by the time Chris Barber’s article “The Salzburg Rally Kings” was published in the November 1974 issue of BEETLING magazine it was accompanied by his photos of all the Salzburg Rally cars lined up – for sale.

I described the Solido model above as representational. It conveys, very excitingly, the charisma of the Salzburg cars and in very late form as one of the team of cars entered in the Acropolis rally during the closing chapters of that now legendary short history.

The decal additions and overall colour scheme are authentic and convey very convincingly the charisma of the whole series. I have no doubt that the model has already found it’s way into many rally enthusiasts hands as well as into many VW fans collections. Models of the Salzburg cars are not particularly numerous and this version has got to be the best yet.

Constructive criticisms? ..yes just one. Purists will quickly spot that the Salzburg cars all ran on 5Jx15 standard style VW road wheels of the era and not the 5½Jx15 Lemmerz GT sports ones borrowed here from the earlier GSR and ’74 Weltmeister versions. I suspect that many people will though in fact prefer this artistic merit choice of wheels to the duller ones from reality.

My closing comment though must of my enthusiastic applaud for the very convincing row of BOSCH lamps that adorn the front bumper of the model. They, and the ones on the real cars, were a quintessential element of the visual impact of the Salzburg Beetles and contribute so convincingly to the overall excitement engendered by this model.