Hayselden Garage, South Yorkshire, UK with a Big Beetle in the rear.

(Tunisgelb was a unique SEB paint colour)
Accent to the paintwork was provided by all black external trim and a satin black rallye stripe to the lower body sides carrying the lettering “jeans”. A similar style “jeans” logo was carried on the engine lid.

As well as being one of the black trimmed group of SEBs the Jeans Beetle was also one of the a group of SEBs based on the most basic of all the Beetles – the “economy”, “basic”, “standard” or “spartan” Beetle – Sparkäfer. This to the extent that some early publicity photographs show examples with standard wheels complete with black hubcaps. We do not know if the M976 option was therefore universally added to the base Jeans specification or if most production versions were just ordered with it inclusive. A large variation of other M options over and above the basic 1200, and basic Jeans package, were factory fitted according to the market the cars were sold in.

S761 Sonderaktion *Jeans-Bug* was one of three models in the “Käfer der Käufer” Edition presented at IAA’73 (Internationale Automobil-Ausstellung), Frankfurt in September 1973.

The prototype naming was changed to The Jeans Beetle for series production.

The 1200cc / 34bhp Jeans Beetle was the first in a long line of designs by Gunhild Liljequist.

At the 1973 Frankfurt Motor Show launch the the Jeans Beetle was priced at DM 5995 just DM345 more than the standard German market 1200 on which it was based. 4000 S761 Jeans Beetles were produced for the German market.

Unlike many other European markets only this, the first version Jeans Beetle, was sold in the UK where reversing lights came as part of the Edition’s equipment list. Priced at £1020.00p it cost £71.00p more than the standard model 1200 Beetle. UK importation amounted to 1,600 examples.

The Jeans Beetle (I) was produced by Volkswagen AG at Wolfsburg (Germany) and D’leteren at Brussels (Belgium). 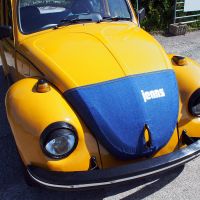