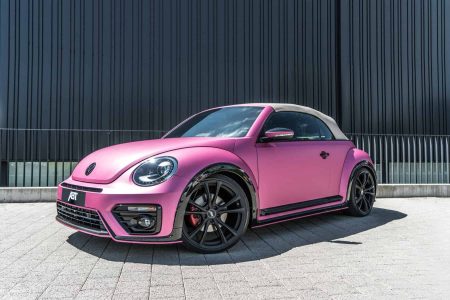 Johann Abt founds a blacksmith‘s shop in Kempten, Germany and in 1950 his grandson does his first race on the Kempten grass track, followed by more than 300 motorsport victories. In 1967 ABT Tuning is founded. With the Abarth, Johann Abt is very successful in hill climbs.

In 1978 VW launches the Golf. ABT will be one of the leading car-tuning companies. ABT team’s double triumph at the “Trophée l’Avenir“ touring car series.

1991/1992 now, Christian and Hans-Jürgen Abt manage the company and in 1991 found ABT Sportsline GmbH. Christian evolves into a victorious driver and in 1991 wins the Formula Junior title. In 1992, he becomes Formula 3 (B) champion and in 1999 the STW champion.

Following Audi’s withdrawal from the STW, ABT Sportsline assumes control of the program itself in 1999. And with great success: at nine of ten races either Christian Abt or team mate Kris Nissen mounts the podium – or both together. The season is dominated by the fierce battle staged between Christian Abt and Opel driver Uwe Alzen. An equally deserving and sensational champion is Christian Abt, who records the greatest sporting victory to date in the company’s history as a result.

As the STW era concludes, the greatest motorsport adventure begins for ABT Sportsline: the squad moves up to the DTM as private team and brings four in-house designed and built Abt-Audi TT-R cars to the grid. The tuning business grows constantly year for year: ABT Sportsline GmbH employs some 200 people, is represented in almost 70 countries spread across all five continents and to this day is the world’s largest tuner of vehicles for the Audi, VW, Seat and Škoda brands.

2002 – in addition to Christian Abt, Laurent Aiello, Mattias Ekström and Martin Tomczyk the former Formula 1 driver Karl Wendlinger from Austria completes the quintet. The season starts with a one-two at Hockenheim – ABT Sportsline heads the DTM standings for the first time. At nine of the ten races at least one ABT driver joins in the celebrations on the podium. In the end the man with the most victories, most qualification race wins, most pole positions (4 in each case) and the highest number of fastest race laps (3) is champion: Laurent Aiello. A dream is fulfilled for the private ABT Sportsline team after beating Mercedes-Benz and Opel.

2004
Adria, Lausitzring, Zandvoort, Brünn: Mattias Ekström wins four races and in the end is 17 points ahead, thus winning the DTM championship. The driver from Sweden scored in every race and only three times did he not end up among the top three. That’s what we call consistency.

2007
The duel is Bruno Spengler vs. Mattias Ekström: After the final, “Eki“ is three points ahead of the Canadian, although either was at the very top only once. Mattias Ekström won the first race, at Hockenheim, but has always been in the top league. His Audi Sport Team ABT Sportsline also win the team event.

2009
A title hat-trick: Timo Scheider repeats last year’s triumph and becomes champion again. For ABT, it is the third DTM title in a row and part of a particularly successful year. Another title: The ADAC GT Masters is the ideal setting for Christian Abt. The former DTM pro is a masterful Audi R8 helmsman and at the end of the season has won by 12 points. This is a superb performance by the 42-year-old. And the third triumph. Christian Abt finishes his active career; Daniel starts his. The son of ABT Sportsline managing director Hans-Jürgen Abt wins the ADAC Formel Masters before he has even turned 17: Another triumph at the end of a year that has been perfect at any rate.

2010
Daniel Abt is promoted to the German Formula 3 cup and again shows what he is capable of. He ends up second overall.

2011
The DTM was a duel between Audi and Mercedes-Benz since 2006. ABT Sportsline concluded this era with yet another title: Mattias Ekström and Mike Rockenfeller bring the team championship to Kempten. The cards are re-shuffled for 2012: BMW enters the DTM, every manufacturer build new cars. Mattias Ekström and Timo Scheider spearhead Audi Sport Team Abt Sportsline in the new Audi A5 DTM.

2012
After finishing the GP3-Racing Season as runners-up, Daniel Abt signs a contract with Team Lotus GP to start in the renowned GP2-series for next year. GP2 is regarded as the top-level junior category below Formula 1. The race drivers are guiding Dallara GP2/11-cars that are powered by a 612 HP V8.

2013
From the Race track to the Street: Cars like the impressive RS5-R are proving ABT’s Know-how and are celebrated by both media and customers. Among other things the extreme athlete, about 100 kilograms lighter than the serial car, was awarded “Best Coupe Tuning” at the “Sportscars of the Year”-election of the renowned magazine Auto Bild.

2014
ABT Sportsline has had a successful start into a completely new motorsport era. With several top-three places the only German team in the international Formula E and its drivers Lucas di Grassi and Daniel Abt have already left their mark. A top speed of 230 kph, from naught to 100 kph in less than three seconds, a sound like a jetliner during take-off and some extra excitement through a unique FanBoost that’s the Formula E.

2015
Especially the RS6-R created a lot of hype in 2015. Customers as well as journalists both agreed: The Audi is the perfect mix of supercar feeling and suitability for daily use. Thanks to its 730 HP, 920 Newtonmeters, 320 km/h Top Speed and a lot of carbon fiber the RS6-R won a lot of prizes.

2016
Exactly 120 years ago blacksmith Johann Abt laid of the first stone for the now world-famous and largest tuning company of cars from the Volkswagen group. Together with our friends and customers, we from ABT celebrated 2016 by presenting several limited-editions cars based on the Audi TT, Audi Q3 or VW T6.

2017
In the third Formula E season, after finishing with the third place in 2015 and second place in 2016, the team was finally rewarded for the hard work: Lucas di Grassi became Formula E Champion after winning the final race of the season! This success, paired with Mattias Ekström’s second place in the DTM series, crowned 2017 to one of the most successful years in the history of motorsport of ABT Sportsline.

GET OUR EMAIL NEWSLETTER