Four years after the release of their introductory SEB model in the form of SOLIDO S1800501 VW Beetle 1303 Weltmeister 1974 in L61A Cliffgrün / Schwarz we now at last have a companion L31A Senegalrot version to keep it company.

Unlike the Cliff Green model which was on universal release to all markets by Solido the new Senegal Red version is however only on release in Germany as one of Solido’s “DEUTSCHLAND SPECIAL EDITION” models for the Simba-Dickie Group. A catalogue grouping that includes the A1 Golf in typical German service liveries and, currently, four 1303 versions exclusively for the German market of which three are SEB themed.

The first of these, S1800510 is a second edition release of the S1800502 GSR which is distinguishable from the version released in 2016 by having a representational Nuremberg license plate N*FC 888 instead of the well known Wolfsburg plate WOB*VW 82 of the original reviewed in SMR 003.

Essentially this second WM ’74 model is a Senegal Red colour variation of the original Cliff Green model. However observant enthusiasts will quickly spot that it now has the addition of brightwork gravel guards on the rear wings. Whilst the green version carried Wolfsburg licence plates I note with a smile that the red has a representational Munich license plate M*WZ 74 the significance of which adds a light touch of humour.

Given that this is for all intents and purposes a colour variation I shall defer to SMR 002 for my in depth commentary on the base model. In that previous review I made observations about how models of the Weltmeister ’74 SEB may have a limited appeal outside of Germany and no doubt this is reflected in the fact the red version has been released exclusively in Germany.

Having said that it occurs to me now, four years later, that these Solido 1303/Super models are building up into a very nice little SEB collection and in that respect the allure of both WM’74 versions has increased significantly. I would not be surprised if collectors who passed over the green version are now retrospectively hunting down an example as a display companion to the red one. Collectors and SEB enthusiasts living outside of Germany need not worry too much about sourcing examples from the restricted marketing of these “DEUTSCHLAND SPECIAL EDITION” models though. At least a couple of the larger, well known, on-line stores in Germany ship worldwide so get shopping whilst stocks last. 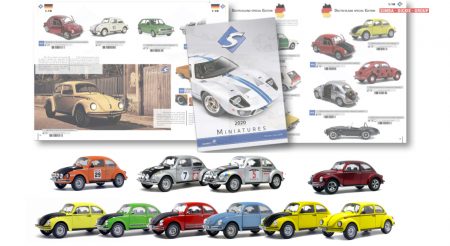 All in all another very welcome SEB from Solido.

Appreciation: My grateful thanks to the Simba-Dickie Group for making it possible to review this Scale Model for the benefit of SEB enthusiasts worldwide.