As more and more owners contact us asking for help to identify whether the Beetle they have is an SEB or not we are finding increasing numbers of former SEBs hiding under later updating and repaints – often with original light clusters, wheels and bumpers changed in line with the ebb and flow of fashions of the day.

Often the identification process is difficult when all original paperwork for the car has been lost over time. In these situations, the fact that on European manufactured Beetle saloons from the 1971 model year onwards, a production plate remains on the car is the link to the start of positive identification.  With the certain knowledge of the original paintwork colour searches for other clues can begin: checking for scraps of original upholstery material, has the Beetle got distinctive fittings such as a padded dashboard, non standard “Sports” gearshift, traces of wood effect dashboard trim, black plastic beading to the wing/body joints etc.,

The finite identification of an SEB without any original paperwork falls to two things – a Stiftung AutoMuseum Volkswagen Birth Certificate and double checking the declarations on that certificate and the evidence from the Beetle itself against the information we provide on the website.

The car’s “production plate” is located on the front apron of your car, painted in body colour, adjacent to the bonnet lock.

The keys to deciphering it are as follows and then supplemented with worked examples: 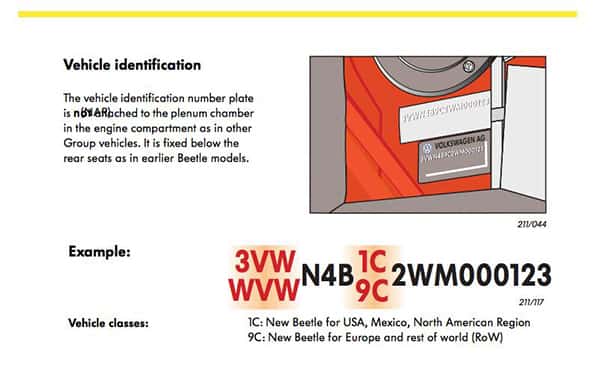 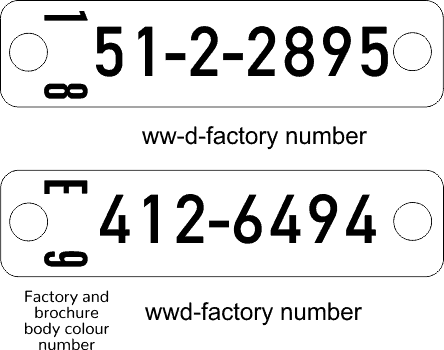 A worked example of how the production/brochure six digit numbers built up a specification for a particular car is 18 31 52. This tells us that this particular Beetle is a 1302 Cabrio with 18  – – Gentian blue (L51B) paintwork. (The brochure entry shows 18 18 – – which unless modified denotes a saloon with body and roof the same colour.) – – 31 – – Light sand Cabrio hood material   – – – – 52 Grey-white leatherette upholstery.

See specific information on the Brazilian Production Plates (in Portuguese).

See our complete SEBeetles Paint List tables to help you with paint and the production plate codes HERE.