Cars made available as near as possible to winners home address. They can optionally add a contract with Beetleboards. 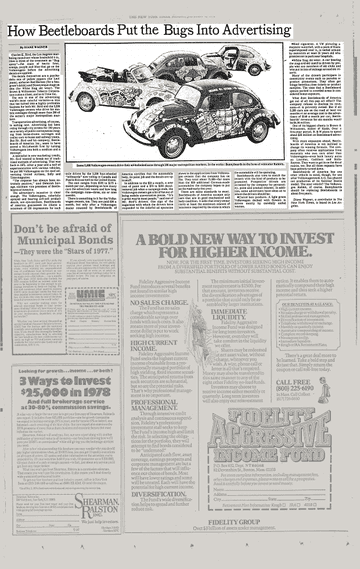 How Beetleboards Put the Bugs Into Advertising.
By Diane Wagner.

Charles E. Bird, the Los Angeles marketing consultant whose brainchild it is, likes to think of the treatment as “Bug spray”—the coats of hectic lime, orange, purple and blue that go on the Volkswagens before the advertising decals are applied.

The decals themselves are a psychedelic mix of yellow zippers (for Levi jeans), airborne Red Barons (for a Seagram’s drink) and Disneyesque stags on skis (for White Stag ski wear). The Brown & Williamson Tobacco Corporation is also a client, and so is Time Inc. The mix is one of the advertising world’s most colorful variants—a mix that has turned into a highly profitable business for both Mr. Bird and the 5,200 Volkswagen owners who drive his mobile messages through more than 200 of the nation’s major metropolitan markets.

Transportation advertising, of course, is nothing new. Advertising has been riding through city streets for 150 years on a variety of public conveyances ranging from horse-drawn carriages and trolley cars to buses and subway trains. But Mr. Bird and his company, Beetleboards of America Inc., seem to have scored a McLuhanish first by turning Volkswagens into both a medium and a message.

A specialist in new marketing trends, Mr. Bird wanted to break out of traditional methods of advertising. That was back in 1972. After a year and a half of experimentation with various vehicles, he put 100 Volkswagens on the road advertising United Airlines, SoHY and Time magazine.

The advertiser’s incentive is clear enough. The Volkswagens, colorfully sprayed and bearing soft-sell product decals, are eye-catchers. Beetleboards of America guarantees its clients minimum of 156 impressions for ‘each -mile driven by the 5,200 four-wheeled “billboards” now rolling in Canada and Puerto Rico as well as the United States. The cost ranges from $100 to $175 a month per car, depending on how many cars the advertiser wants and how long the campaign runs—three, six or nine months.

There is something in it for the Volkswagen owners, too. They are paid $20 a month, but only after a Volkswagen dealer retained by Beetleboards of America certifies that the automobile body, its paint job and the decals are up to snuff.

In addition to the $20 a month, a new coat of paint and a $70 to $100 decal removal job when a campaign ends, the Volkswagen owners get a lot of fun out of being mobile conversation pieces. “It’s a great way to meet people,” said one of Mr. Bird’s drivers. One sign of the eagerness with which the drivers have responded to the colorful ad operation shows in the applications from Volkswagen owners that the company has on file. They total about 75,000—far more than the 800 additional German made automobiles the company hopes to put on the road early this year.

There are some standards to meet. Beetleboards of America accepts only cars that are in good mechanical and body condition. It asks that every owner carry at least the minimum amount of insurance required by the state in which the automobile will be operating.

Beetleboards also tries to match the owners with the kind of products to be promoted. Prospective drivers are screened by the company for personality, poise and product interest. In addition, some advertisers have ideas as to whom the drivers should be:

Many of the drivers ‘participate in community events such as parades or product promotions. They often get. fringe benefits—free tickets or product samples. The time that a Beetleboard spends parked in crowded areas is considered bonus exposure.

What does Beetleboards of America get out of all this pop art effort? The company refuses to disclose its revenues—it is privately owned. But if all 5,200 cars are on the road at least six months at an average cost to the advertisers of $140 a month per car, Beetleboards’ revenues for six months would be $4.36 million.

One of its biggest clients is Brown Williamson, maker of Kools. Over five-year period, B. & W.plans to spend about $35 million on Beetleboard advertising.

With more expansion ahead, Beetleboards of America is not inclined to change its winning formula. The company often receives applications from motorists who own cars other than Volkswagens—even ‘such luxury autos as Lincolns, Cadillacs and RollsRoyces. They want to get in on the decal mania, too. But all these requests have been politely turned down.

Beetleboards of America has one other vehicle in mind, though, for use after Volkswagenwerk A.G. has phased out production of its familiar Beetle model. The next vehicle? The Volkswagen Rabbit, of course. Bunnyboards should be replacing Beetleboards in about five years.

Some 5,000 Volkswagen owners drive their ad-bedecked autos through 200 major metropolitan markets. In the works: Bunnyboards in the form of vehicular Rabbits.