The development of local variations of the Volkswagen model theme in South Africa is, in Volkswagen worldwide production history terms, unique – and very interesting. For many years the country was the subject of international economic and political sanctions. As result the evolution of South African built vehicles developed not only under the influence of local driving conditions but also under the influence of a country living in comparative isolation.

These themes apply across the whole history of automobile development in South Africa from the 1960’s onwards until the ending of Apartheid in 1984. Given such a long established history of development in isolation the South African motor industry remains, even today, a very localised and often unique subject area.

Whilst in other sections of “Articles” we have given clarification to the misunderstandings of European versus US and Canadian Beetle badging, terminology etc., South African Kewer / Beetle models are, to European and North American VW enthusiasts eye’s alike, a little confusing and confounding. The Kewer / Beetle variations produced at the Uitenhage plant display production idiosyncrasies that cannot easily be reconciled with European, North American, Brazilian or Mexican model year changes. For example the issues surrounding badging “VW_1302_S” and “VW_1303_S” do not arise when considering South African Beetles: they were badged “VW_1600”. Even more unusual was the introduction in 1977 of a “Super” variation having the curved windscreen and associated dashboard from the European 1303 yet retaining the traditional torsion bar front suspension arrangement.

Given the constrained local market in which the Uitenhage Beetles were produced in between 1973 and 1978 places other interesting twists into their story – and frustrates research about them. Paint colours for example were not sourced from a wholly Volkswagen palette but from ones shared also by other manufacturers having production bases in South Africa. In the extensive research we have undertaken whilst upgrading the SEBeetles.com information we have been unable to find paint colour references and actual paint names of many of the colours used on South African SEBs. The only colour information available to us was that included in VWoSA sales literature. These appear to be “sales/publicity” names for the colours rather than paint chart names. Referencing the extensive and helpful Glasurit web information for “VOLKSWAGEN RSA” colours fails to bring any conclusive evidence that attribute a paint colour to the SEBs.

A consistent theme of SEB series  throughout the 1970‘s was the inclusion of special “sports” wheels as part of the Edition package. In the case of the Uitenhage SEBs a local variation on the “Rostyle” theme was fitted instead of the Lemmerz wheel familiar on European produced SEBs (detailed in Articles Section E1.6.).

The styling of this wheel had two hereditary threads – the Lemmerz “Sprintstar” and the similar derivations on the theme of pressed steel wheels emulating the ribbed style of alloy wheels manufactured by the British firm of Rubery Owen. (Rubery being a suburb of Birmingham and therefore in the 1960‘s and 70‘s at the centre of one of the British motor industries heartlands – and home of Rover, Land Rover and MG amongst others). The Rubery-Owen-Style wheel became known as the Rostyle‘  and became a familiar sight as OE fitment on many popular model ranges from, amongst others, MG, Truimph, Ford and Opel.  In terms of mass production sports cars the introduction of the Rostyle wheels heralded the death knell of wire wheels. Both the Lemmerz/EMPI “Sprintstar” and “Rostyle” designs were painted in aluminium with gloss black accenting. Rubery Owen also made chromium plated versions for Jensen, Rover and Ford for the 1600E model Cortina.

Rostyle wheels were manufactured under licence in various locations around the world including Germany and Argentina in addition to Britain. Given what has already been said about the constrained local market in which Volkswagen and other manufactures were producing vehicles in South Africa it is not surprising that “sports” wheels were also supplied to some of them by a local source. The South African version Rostyle wheels for Volkswagen and Ford in particular came from GUESTRO Industrie (Ltd) Pty., located in Port Elizabeth.  As with Lemmerz, GUESTRO, became successively absorbed in company amalgamations culminating with their current form, Global Wheel (Pty) Ltd., established in 2005

Uitenhage produced Beetles had five bolt wheels right up to the end of production in 1979 and the Rostyle version from GUESTRO gave a very unique look to several of the models including the SEB’s.

The fitment of small, circular, white front reflectors to the front wings just below and to the outboard of the headlights. This detail was consistent to all South African produced vehicles in compliance with local traffic legislation.

A final form of, enlarged, rear light cluster that was accommodated on the earlier shape rear wing pressing by a similarly enlarged support housing. 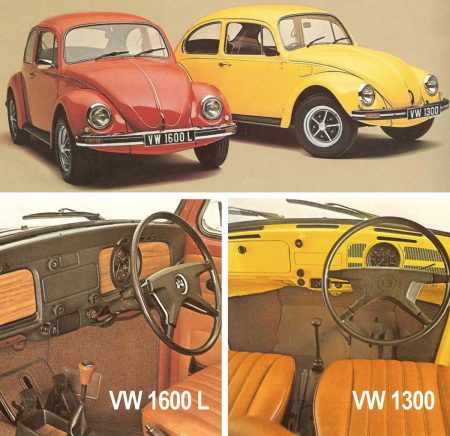 All but one of the South African Special Editions were based on the 1600L version of the typ. 114Z Kewer / Beetle and as such had full carpeting, padded dashboard with wood veneer effect trims to the glovebox lid and panels either side of the speedometer, wooden gear lever knob, centre console, the ‘sports’ style version of the series production four arm steering wheel having a stitched, grained, padded rim and aluminium silver trim to the horn pad (that in European production was only ever fitted to Lux trim Edition models) opening rear side windows and 4½J x15” Rostyle style wheels with with 155SRx15 Radial  tyres. Tinted window glass was also a feature of the late series “L” models. The exception was the Jeans Bug which was based on the 1300 version of the typ.114Z.

In the eyes of enthusiasts worldwide many of the Uitenhage Special Editions fall into the “very desirable” category and from this era came one of the most desirable Beetle models ever to leave a Volkswagen factory – the SP1600.

Initially a 1977 model year SEB it continued in the range until end of Beetle production in South African with the 1978 model year.

Sadly no scale model of the SP1600 – or any of the other Uitenhage SEBs has ever been made. In fact as far as we are aware only one accurate scale model of a South African Beetle has been made so far and is witness to the comparative rarity of all matters associated with Volkswagen Beetle production in South Africa.