There is no doubt that SOLIDO are building themselves an enviable reputation when the it comes to modelling SEBs.

This the latest version only announced in January at the Nuremberg Toy Fair 2018 is already on the market. It follows the previous offerings of the Weltmeister ’74, GSR, and Salzburg Rally Beetles reviewed in SMR 002, 003 and 004 respectively.

A good starting point is to look back to a quote from the review of the Weltmeister ’74 (SMR 002).

“What this base model has given SOLIDO is the opportunity to very easily produced other variations that would have far wider appeal in the form on the 1974 S763 “Big Beetle” and S764 “City Beetle” introduced at the 1973 Frankfurt Motor Show as part of a three model line up that included the original S761 Jeans Beetle in Tunis Yellow. The Big Beetle in particular was one of the much better known SEB version of the 1303 sold in most (then Western) European markets including the UK in three colours of which L95M Ontario Blue metallic is probably the best remembered.”

Congratulations SOLIDO for bringing us exactly that.

Given that extensive review coverage is already given in SMR 002, 003 and 004 to the base model which all four of the versions are derived from I can cut straight to the chase about specific details of this latest 1/18th scale SEB.

I am impressed: from the first glimpse of the packaged model, this latest offering exudes charisma and very definite “Big’” vibes.

Representing the mainland Europe version as supplied to both the West German home “inland” market and several “export” markets the first thing that is very noticeable is just how accurate the L95M (U6) Ontario-metallic paintwork looks. A finish very convincingly enhanced with superb black rally side striping which authentically carries the 1303/Big inscription on the rear quarter panel.

The 5½Jx15 Lemmerz steel GT sports wheels first introduced by Volkswagen on the GSR were also very much a part of the external image of the Big Beetle package and so make an easy transformation possible for Solido in bringing forward this latest SEB.

What delights me though is that is far from just a repaint reissue. The SOLIDO product development team look to have done some thorough homework before bringing their newest 1303 model to the market. The original 1303 base model tooling included front valance ventilation slots portraying the Volkswagen factory option M550 which although is correct of the GSR and Rally was not correct for the Weltmeister ’74 model on which they were also included. This has been corrected for the Big Beetle which comes with standard, unvented, valance panel.

Turning to the modelled interior and being mindful of criticism previously levelled at the GSR for lack of detailed attention to authenticity SOLIDO have made a major effort with the Big Beetle.

It must be accepted that the market sector that these 1/18 SEBs are targeted (and priced) at is not the same as, say, that of the Ottomobile range and rationalisation of detailing is therefore understandably tailored accordingly.

Having said this the proportionate attention given to the Big Beetle is admirable in that it includes a portrayal of the wood effect dash trim and special gear shift knob of the original together with a very a creative attempt at a portrayal of the leatherette with velour facing upholstery. A pedantic enthusiast might spot that the additional instrumentation of the GSR has been carried over but on the plus side it makes for an easily imaginable Big’ dash fitted out with an owner installed a set of VDO accessory gauges.

Consistent with all of SOLIDO’s previous 1303 issues the Big Beetle comes representing a car with the Volkswagen factory fitted option of the standard high back seats of the era (optional in Europe, mandatory in North America) and which were fitted to some Big Beetles supplied into mainland Europe as illustrated in one of the well known early publicity photographs included the gallery of photographs in our individual profile of Big Beetle. 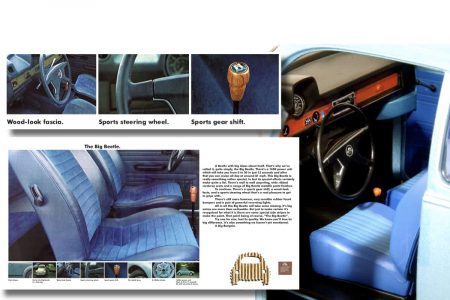 inally whilst putting the interior under close scrutiny the “icing on the cake” is that SOLIDO has gone to the trouble of detailing the standard four-spoke steering wheel with silver embellishment so that it represents the leather-trimmed version fitted to several of the Lux trimmed SEBs including the Big’.

There are, curiously, quite a few models that look far better in real life that any photograph of them conveys – SOLIDO’s 1303 Polizei version was a notable example – and the Big’ Beetle is to some degree another. We ended up getting some satisfying images during our photoshoot that conveyed the “feel” of Volkswagen’s 1973 original but the actual model looks even better in real life than it does in the photographs.

This is a delightful and much welcome addition to the growing line up of 1/18th scale SEBs from SOLIDO and given that there are still several notable 1303 SEBs as yet unrepresented we hope that more will follow.

Repeating an observation from SMR 003: what these SEBs issued to date have given SOLIDO are the first of a very short series of steps into opening up a large and surprisingly untapped market. With a minor investment in setting up toolings for new component parts to represent the larger front indicators  fitted to North American market Beetles the GSR’s contemporary for the USA and Canada – the Sport Bug – could easily be added to SOLIDO’s catalogue. The Sports Bug was every bit as charismatic as the GSR and in 1/18 scale would, I suspect, be a very quick seller on both sides of the Atlantic on account of its reputation. I mentioned earlier a surprisingly untapped market. Given that North America was such a massive sales market for the Beetle and has, proportionally, a significant number of potential customers interested in accurate, high quality, scale model Beetle it is almost incomprehensible that (as far as I am aware) no model exists of a later series North American specification Beetle with it’s very distinctive large front indicator lights and larger bumpers. Something probably due to the fact that scale model Beetle (as distinct from toys) generally originate from Europe and therefore represent European market specification vehicles! These are perhaps, with even a little more tooling investment, scope for even a Sun Bug as well.

Appreciation: My grateful thanks to SOLIDO for making it possible to review this Scale Model for the benefit of SEB enthusiasts worldwide at the earliest possible opportunity after its release onto the market.