Not a factory produced SEB as such but a model of a Beetle that most definitely fits within the special guest, historically acknowledged and tuning landmark Beetles that we at SEBeetles think are worth celebrating.

Several years of working in the SEBeetles team has honed my skills at doing research on “forgotten” aspects of Volkswagen production history. I am frequently heard referring to this automotive version of an archaeological dig likening it to searching for lost pieces of a jigsaw puzzle. As you gather them, piece by piece, you slowly build up the picture of your research subject until (generally) it becomes clearer and clearer.

Well there were quite a few jigsaw puzzle pieces of the backstory to this little car scattered around the internet but it took several hours to find them and try and fit them together – so here for (I believe), the first time is as complete a (succinct) overview picture as can be put together….

Far from being a fanciful or imaginary livery this newly released 1303 Rally represents, as the Solido website outlines, a very unique, real, car that endured something like a dozen years of participating in major international rallying.

In fact, it has a history that in so many ways is a real-life parallel of the Walt Disney’s “Love Bug” stories … and has three distinct chapters. 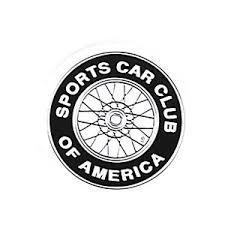 The first chapter centers on Al Schmit a Luxembourg national who in lived in Fort Lee, New Jersey and worked for Pan American Airways. He was a passionate international rally driver with connections to the Porsche works Rally Team. As such he was a regular competitor on the American rallying scene being a familiar figure at Sports Car Club of America (SCCA) Pro rally series and other events across the north, central and southern American continents.

This particular Beetle entered Al Schmit’s life when his wife Ferdie bought it new (apparently on a whim) because, wanting her own car, she went to a local VW dealer told them she wanted a Beetle, which had to be red and that she was paying for it that day. The story goes that “when she got home and told Al she bought a car, he asked what kind and she told him a VW Beetle. He told her he’d be right back…and was gone for several hours. When he returned, he said he had them make some ‘modifications’ to her car:) She said the clutch was so stiff it took 2 feet to depress it. She pretty much resigned it to Al’s rally car and ‘got a Buick, that was much nicer!’ So the car was originally red and not orange.” The FA lettering seen on the car in many photos were Ferdie’s initials as the car’s owner and main sponsor. 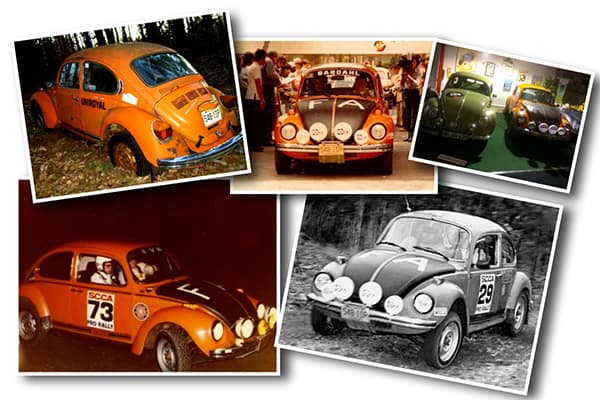 Driven by Al Schmit and navigated by a long list of experienced names on the rally circuit at the time it competed in numerous rallies between 1973 and the mid-1980’s Mechanically the Beetle underwent several discrete reincarnations despite still remaining essentially an appropriately modified standard North American spec “Super” Beetle. It’s outward image also went through a series of image make-overs throughout it’s rallying career.

It appears the last event it was known to have competed in was the 1986 Alcan 5000 and the last time the car was registered as street legal being in 1995. It was then laid up to make space for other projects although sadly never to be returned to as Schmit had intended because of his passing in 2007.

The second chapter started seeing it remained parked up in the open to gradually deteriorating until acquired in April 2009 by an American rally fan named Scott Swenson – eleven years after he first noticed it has been laid up.

Swenson was very obviously besotted by the car and it’s past history. He put considerable efforts into tracing people that had crewed it and been involved with it. In this way, he started to gather together a photo and information library that helped build a complete retrospective history of the car. In anticipation of the full restoration that he planned to carry out he even put a lot of work into trying to replace and replicate the stickers carried by the ca . It appears that the restoration was lined up as a feature to appear in HOT VWs magazine although I can find no record of it having reached publication stage. This was probably due to Swenson seemingly falling on hard times through 2011 and reluctantly deciding to “let the car go …” (with clear caveats about who he would let it go to …)

The third and happier chapter saw it coming to Europe and in May 2014 joining the fantastic Grundmann Collection thanks to Christian Grundmann who’s family have an amazing reputation for the extensive restorations they have carried out on quite a few very rare vintage Volkswagen’s. So the car has survived not only the punishment of a long record of rallying and over a decade of abandonment to the weather before finally resting into a comfortable retirement amongst some of Europe’s most cherished (and coveted) vintage Volkswagens – and now immortalised by Solido’s new offering.

Knowing that amazing backstory brings this latest version of Solido’s 1303 Beetle alive – and wow what a fabulous companion it is to Soldo’s Salzburg Rally Beetle! (SMR 004)!

Now whilst Solido’s recent Big Beetle issue (SMR 005) was very accurately detailed passing the scrutiny of SEB fans and owners of real Big Beetles with flying colours this version in SCCA guise will appeal to collectors who may be a little more forgiving over minute details.

The 1303 when sold in North America was known simply as a “Super” Beetle (or Bug) and had the straightforward “VOLKSWAGEN” engine lid script and not the “VW_1300_S” badging the model carries as several members of the SEBeetles Facebook Group were quick to point out when the first Press Photos of this SCCA Beetle were released by Solido.

North American Beetles of the 1970s had much larger front indicators than the European models and the original car also had the slots in the front valance panel of the Volkswagen factory option M550 as correctly carried by Solido’s GSR (SMR 003) and similarly correctly deleted from the body tooling of the Big Beetle issue. So whilst the purist Volkswagen collector may notice these small anomalies between the original car and the 1/18th Solido model I am sure that the pure joy of the model will, for all rally fans, pale these details into insignificance. One last commentary on detail is that whilst the original car always ran on a variety of standard VW road wheel Solido has – as with the previous Salzburg Rally version – shod the model with the attractive 5½J x 15 Lemmerz “sports” road wheels of the GSR and Big Beetle. The artistic license that in both cases enhances the overall look of these rally model’s to (I suspect) almost everyones consent – including, probably, even purists!

Given that the Schmit’s Beetle went through a succession of image make-overs whilst in its halcyon rallying days the overall impression of the model is a very happy image capture indeed. The bank of CIBIE lights are inspiring and make a brilliant (without pun intended) impact – especially when the model is sat alongside the BOSCH adorned Salzburg Rally version. Whilst the interior carries the same criticism as that I made for the GSR model the finish of the rally decals is admirable. A particularly nice little detail is the “New Jersey 548 -IDP” license plates. These were the last plates it carried in action and remained on the car during its long period of abandonment. The model makes a very eye-catching display model indeed – and one that is a good conversation piece now you know it’s back history!

My immediate reaction to this model also is that judging by responses on dedicated Facebook Groups, it has already endeared itself to collectors in the USA. It’s charm is in being distinctly American and offers “Super Beetle” collector’s something that is just that. As I have mused before with just a modest extra investment in some small but important idiosyncratic North American details Solido could be on to a winning thing as my guess is that there is a hungry market waiting to be opened up on the other side of the Atlantic. I just hope this SCCA Rally Beetle is the first taster of more “Super Bugs” to come and it would be nice to hope that one day it will be followed by a North American version SEB ..

Appreciation: My grateful thanks to SOLIDO for making it possible to review this Scale Model for the benefit of SEB enthusiasts worldwide at the earliest possible opportunity after its release onto the market.