In the USA Formula Vee magnesium alloy wheels were manufactured by Whitney Industries, Inc., designed by partner/owner Michael Gibbons and made for the Riviera Motors of Oregon owned Volkswagen Dealerships in 1968. Later made available to all US VW Dealers as part of the Formula Vee range – listed as the ‘GT Mag Type’. The casting was done by Pacific Light Metals Foundry from A356-T6 tempered alloy, a special aluminum-magnesium-beryllium-titanium alloy – lightweight and very strong. From 1972 Superior Industries ‘Turtlebacks’ were available.

The Formula Vee single seat race car was conceived in 1959 by Hubert Brundage (a Florida Volkswagen Porsche Dealership – the company now known as Brumos), who commissioned Nardi of Italy to build a prototype using standard VW parts for the existing Formula Junior races.

A new 1958 113 Beetle was sent to Torino by Brundage for Nardi to disassemble and use the engine, transmission, suspension, etc. to produce the car. In 1961 the car was sold to George Smith and William Duckworth, who were interested in creating a new series based on Volkswagen components that they wanted to call ‘Formula Vee’. Using the Nardi as a model they began constructing and selling their ‘Formcar’. The idea was to promote a low cost race car, and launch the new class.

In 1962 four Formula Vee single seat cars competed in a race in Savannah, USA. The newcomers were looked at as slow modified Beetle-descendants and were to start from the back of the grid. The race however ended in a spectacular triple victory for the new Formula Vee cars. On January 18, 1963 the Formula Vee Racing Association was founded and Formula Vee is still popular today in many countries. 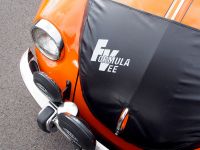