With the exception of a brief period around the time of the introduction of the 1300cc Beetle for the 1966 model year the 1200 model was unbadged. These first Beetle engine lid badges were simple “1200” and “1300” scripts.

What changed in August 1970 was the introduction of the significantly reengineered 1302 with a substantial number of technical revisions including the use of McPherson strut front suspension. (1302 Super Beetles)

To denote this significant new model Beetle Volkswagen introduced new model badging in the form of  “VW_1302”: badging that did not sit easily with the US importers and hence the start of the widening divide between “inland” and “export” models.  In Europe this new model was called a Super Beetle in advertising and sales literature but badged on the engine lid “VW_1302”. It’s counterparts destined for USA and Canada were described in advertising and sales literature as Super Beetles or Super Bugs and badged on the engine lid “VOLKSWAGEN”.

In addition August 1970 saw the replacement of the 1500cc engine with the 1600cc unit. So as to avoid confusion with the established typ.3 range known universally as the VW_1600’s Volkswagen choose not to badge Beetles with the new more powerful engine logically as 1600 in the way the 1300 and 1500 had been. Instead a suffix system was introduced to indicate if a car had the 1600cc engine.

In of the 1960’s and 1970’s “S” in the German motor industry stood for “Super”, “stärkerer Motor” (more powerful engine) or, colloquially, “Schnell”  (German for ‘fast’ as in when you want something to be done quickly). The term “Super” as used by PORSCHE must not however be confused with Volkswagen’s use of the term “Super Beetle”.

In Volkswagen nonclementure, the “S” denoted that the car carrying that suffix to its model badging had a 1600cc 50PS engine.

An “L” suffix had previously been added in August 1969, for the 1970 model year, to denote that the car was equipped with a “Luxus” (luxury) trim package. This was the culmination of a series of changes to the way Volkswagen marketed the “extras at extra charge” options for the Beetle.

Way back in the 1950’s and 60’s a growing list of factory orderable options had been available for the Beetle that included the famous Eberspächer stationary heaters for cold climates, flip opening rear side quarter vent windows for hot climates and alternative upholstery fabrics. In that era, these orderable extras were not generally listed in the main brochure but in supplementary literature, prices lists and the factory “M” options list.

Major changes came in August 1967 with the introduction of the significantly revised “new Beetles” the development of which had been largely prompted by increasing legislative requirements in the USA and Canada. Those requirements influenced both the substantive bodywork and mechanical changes for the European produced 1300 and 1500 Beetles for the 1968 model year onwards as well as the equipment fitted to them dependent on the recipient market. One of the most visible examples of this was the new padded dashboard cover and high back seats which were obligatory on Beetles bound for North America but then offered as an orderable option in most other LHD markets. (Another good, pre-August 1967, example of this practice was the “towel rail” bumpers introduced to meet US requirements but similarly offered as an orderable option in most other markets and listed in the UK price list as “American bumpers”)

For 1968 the German, and some other European “export” market, Beetle brochures offered two packages of optional “extras at extra charge” which directly mirrored the new fittings required as standard in North America:

By the following year – the 1969 model year – the brochure listings for Germany (and in variations of the options in other non-North American markets) increased to comprise of:

Then one year later again in August 1969 for the 1970 model year this was consolidated into an orderable “L” package that was publicised on introduction with it’s own single A4 page leaflet to supplement the information about orderable extras in the main Beetle brochures printed in Germany for non-US and Canadian market distribution. The leaflet front photo showed the rear of a Beetle with “VW 1300L” badge on the engine lid and on the flip side a series of detail photos and multilingual texts proclaiming:

By 1971 and the introduction of the 1302 series Beetles the main brochure carried a double page spread of photos showing some of the these orderable options and a note to close the list of “extras at extra charge” listings in the back pages with the additional item “Schriftleiste mit zusätzlichem „L” “- Title bar (engine lid badge) with additional ” L “.

The use of “A” was used in the literature but never on badging for the base or austere models also known as “spartan” or “economy”.

This system applied throughout the life of the 1302 and 1303 Beetles and their contemporaries.

The only other variations were :

“VW_Automatic” fitted to Beetles with the Saxomat transmission (“AUTOMATIC_StickShift” on some US and Canadian models),

“FUEL_INJECTION” to later US, Canadian and Japanese market Beetles 1975 -1979 and

Having said all of this Beetles exported to Japan were something of an exception to many rules. Simplistically they were outwardly European specification models rather than US/Canadian specification models fitted with US-style specification engines because of increasingly stringent environmental legislation. Given that Japan was one of the very small number of European production export markets during the period 1970 – 1979 that required RHD models there are outwardly many general similarities between Beetles sold in Japan and the UK. One difference, however, was in the badging. Late series 1200’s for Japan had 1600cc fuel injected engines which given the themes of Volkswagen badging described above made them VW 1200 LSE Beetles drawing on the badging used on the typ.3 and typ.4 series of “E” for “Einspritzer” (German meaning of injection) denoting fuel injection in addition to the “L” and “S”. Engine lid badging for late series Japanese market models glossed over this by using the simple “FUEL_INJECTION” script as used on most US and Canadian Beetles (See 1978 Glory Beetle). Japanese market sales literature however used  “VW_1200_LE”  and on some very late reference sources “VW_1200_LSE”.

One other aspect of standard European production VW Beetle badging 1970 – 1979 was unique to Japan. The importers Yanase & Co.Ltd., detailed Beetles with, and made available as an official accessory for the Japanese home market, a vinyl side trim decor set very similar to the ones fitted by Volkswagenwerk to all three of the 1974 – 1975 “Jeans” series Beetles. This decor trim had the word Beetle in a unique typeface showing on the rear side bodywork panel.

Most European production SEBs of this period carried badging of the standard, contemporary, model on which they were based.

The notable exception was the 1973 GT Beetle series for the Republic of Ireland and UK which arrived at the importers badged “VW_1300_S”.  As part of the sales promotion package these cars were intended to have replacement “GT_BEETLE” badges installed by the selling dealerships. These replacement badges were far more fragile than the normal series production alloy VW badges and consequently were far less durable. More robust, higher quality, aftermarket, replacement versions have been manufactured in recent years by enthusiasts to support restoration work on this particular SEB series.

The 1974 and 1975  “Jeans” series’ were the exception to the norm of 1200 Beetles being unbadged. They all carried a black vinyl logo in stylised typeface on the engine lid. This stylised logo was repeated in a vinyl side trim decor set. 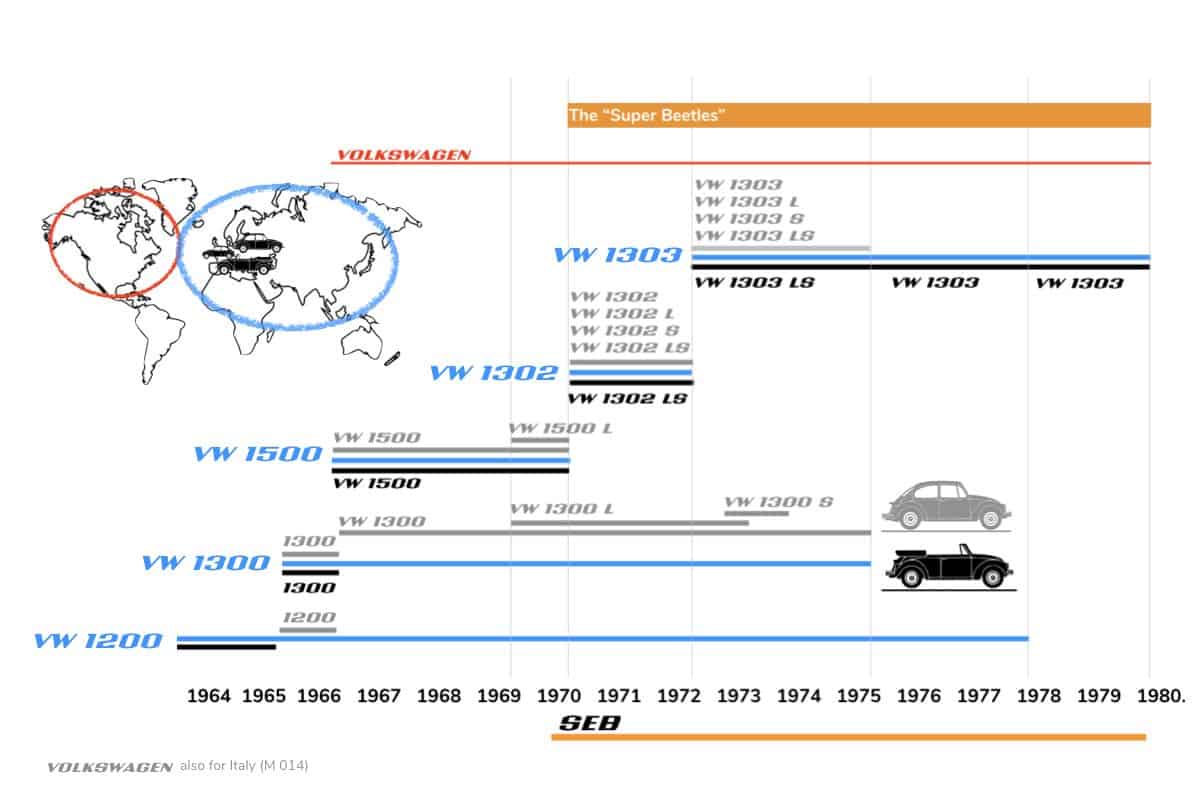 Aftermarket replacement trim decor sets can be found via the internet for the “Jeans”, “1303/City” and “1303/Big” SEBs to support restoration work.

Finally, badging and decor trim sets were available from dealers in the “Formula VEE” and “super VEE” accessory ranges. The replacement “super VEE” badges were, like the “GT_BEETLE” badges, vulnerable to breakage and deterioration with age.