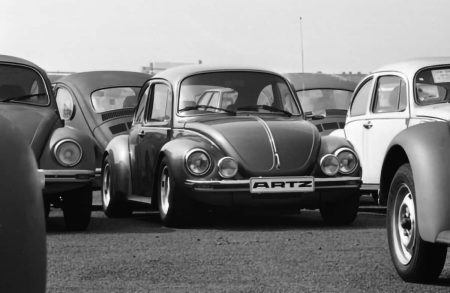 Volkswagen Dealer Autohaus Nordstadt in Hannover, Germany, had a very creative manager back in the 1970’s and 1980’s by the name of Günter Artz. In 1973, Artz built a Porsche Carerra-powered Volkswagen Beetle that turned many heads, which led to him establishing his ARTZ tuning business, a subsidiary of Nordstadt.

While many special models left the ARTZ fabrication facility – Scirocco truck and wagon, convertible Jetta, Porsche 924 and 928 wagons – it is the Golf 928 that is probably the most remembered. The Golf 928 (aka Super Rabbit) was built around a Porsche 928 chassis and drivetrain in 1978/1979. This required major fabrication work to the Golf’s body – widened by 9 inches (30cm), lengthened, and the windshield & roofline lowered 10cm ; only the doors and side panels were factory-original Golf and the project cost a fortune ($3500 just for the windshield!). The car was powered by the 928’s V8 4.5L engine, producing 240 horsepower. The car’s interior amenities included power windows, power sunroof, and air conditioning. Also featured in the Golf are the 928’s leather seats, steering wheel, dash, instruments, and wheels/tires.

An alleged ten of these Golf 928’s were built. The second generation “Super Rabbit” was powered by the 928’s 4.7L V8, producing 300hp, knocking 1 second off the trap time.

Wanting a different challenge, in 1979 Artz took the recently-debuted Golf I Cabriolet and applied his magic. Because the car was not built around a 928’s powertrain, the length, width, and interior remained factory-original. Because the roofline was lowered, the car required a custom convertible top (with a wider plastic rear window) and top cover. As with the Golf 928, the Speedster’s glass windows were all custom.

Just six Speedsters were built: One came with a 70hp engine, two had Schrick turbo engines, and the remaining three had the 110hp DX engine from the GLI. Cabriolet. Unlike the Golf 928, all of the Speedsters were constructed using brand new Golf Cabriolets, save for one (#02, presumably the 70hp), which was built from a damaged year-old model.

In 1982, German automotive accessories company Kamei requested two Artz Speedsters, both of which they used to promote their new X1 body kits. One of their Speedsters was painted a golden hue (above left), while the other was silver. Both were equipped a Schrick-turbo’d 1.6L engine, producing 110 hp. The gold Speedster had a cloth interior, the silver Speedster came equipped with black leather. A private owner of a green metallic Speedster had Kamei affix their X1 kit, along with making the car a two-tone’

Where are the Speedsters now?

One was inadvertently crushed while undergoing a G60 swap at a shop in Germany. It is unknown which Speedster it was.

The white 1979 1.6L Speedster, #02 rebuilt by Artz, was repainted silver. It was bought in Kassel, Germany in 1996 and sold in 1997. It was sold again shortly thereafter and its current whereabouts is unknown. Allegedly it still lives, but is nothing more than a shell awaiting restoration.

The 1982 silver Kamei Speedster was bought in Wetzlar, Germany in 1997 sans its Kamei body kit (a previous owner had done away with it long ago, along with the turbo). Due to fatal rust, it underwent extensive restoration and 16V swap, along with the installation of a Sportline interior, in 2008 and is back on the road (link to the restoration process is at the bottom of the page). It is the only Artz Speedster known to still be driving.

The fate of the remaining three Speedsters is unknown.

GET OUR EMAIL NEWSLETTER