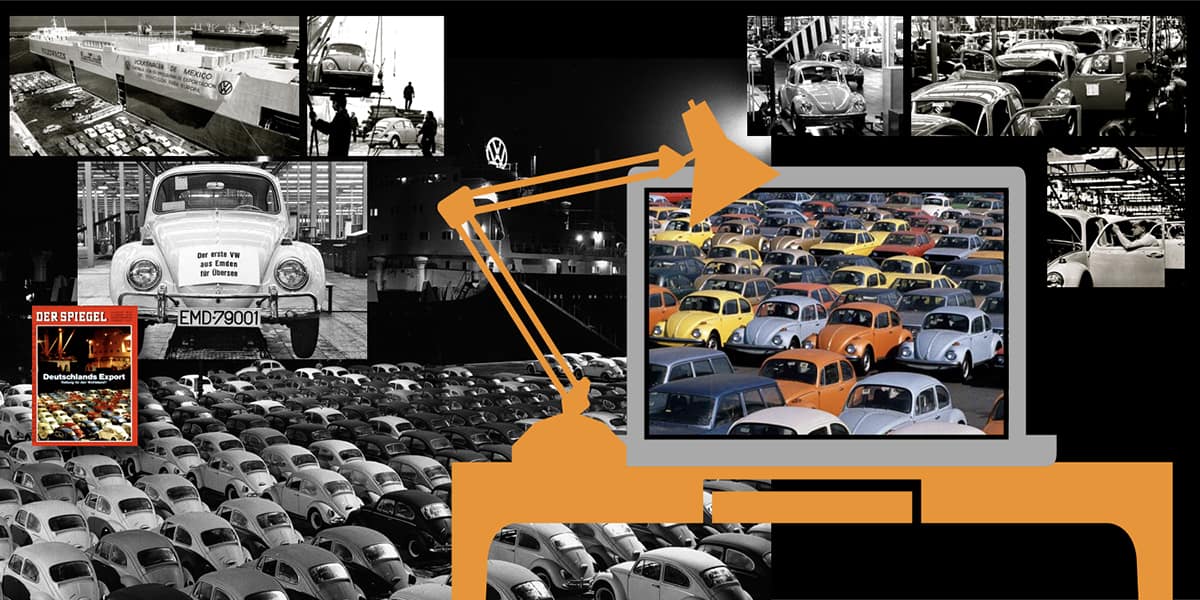 I saw my first Special Edition Beetle (SEB) 45 years ago – a brand new UK market “June Beetle” on display on my local Volkswagen dealers forecourt. This top of the range 1970 model year 1500cc based “Special” awed me with it’s stunning Signal Orange paintwork. The excitement that it aroused in me engendered a passion that continued to be fuelled throughout the 1970’s with each successive SEB delivery to dealerships. A passion that has never left me.

A significant amount of information has been published in books and magazines about Volkswagen production history during the past 60 years. An early definitive history “Beyond Expectation (The Volkswagen Story)” written by K.B.Hopfinger was first published in 1954 – the year I was born. This book and “Small Wonder (The Amazing Story of The Volkswagen)” written by Walter Henry Nelson first published in 1967 were, for a long time, the mainstay reference reading for Beetle enthusiasts. They were then followed a seemingly inexhaustible supply of new publications since the late 1970’s covering, between them, almost every conceivable detail of Beetle production history.

There is, however, one particular subject area of that history that has not yet, as far as I know, been the subject of a specific, authoritative, book: The Special Edition Beetles.

Back in 1983, I wrote “….quite a lot is now known about the early years of Beetle production. There is, however, a grave danger that the later production years will become those about which least is known. Given that knowledge is largely based on written or photographic records (the memory is not only comparatively short but also quickly loses finer detail) the European Specials will soon become an unknown chapter (in Volkswagen production history) if no positive step to document them is made now”

Those words were in the introductory paragraphs to a series of articles, to which I had contributed, about the SEBs in “Volkswagen Audi CAR” Magazine published in England during 1983-4 by Autometrix Publications. That series of articles was an extensively researched project and a positive step towards documenting the history of the SEB’s. It was a three-part series that comprised of something like a dozen articles. The series was initially prompted by a lot of interest shown by readers in an earlier single article on the subject published in the May 1981 issue of Volkswagen Audi CAR’s predecessor “BEETLING” Magazine.

Subsequently, I wrote further articles on the subject of SEBs for “Safer (later Volkswagen) Motoring” Magazine and gave detailed assistance to others including Jonathan Wood for his book “VW Beetle: A Collector’s Guide”

All my articles from the 1980’s were, for convenience, written under the quasi-pen name of “Beverley and Stephen Hardy” supplemented later also by a small amount of work for “VOLKSWORLD” Magazine under the pseudonym Jan Sebestyén. From the mid-1990’s all my published work can be identified simply through the use of my own name, sometimes “Stephen Hardy”, or in full “Stephen Paul Hardy”.

Those articles from the 1980’s, of course, predated the era of the www: an era when information was researched by writing letters, making telephone calls, sharing information by word of mouth and picking up news from credible sources and magazine articles written by authoritative automotive journalists …. and recorded by film camera.

As is often the case with iterative research some of the details given in those 1980’s articles have been shown to be inaccurate or incomplete either through misinformation or wrongly based assumption. They were, however, a foundation building block on the subject.

Since then much has been written, in many books and magazine articles, about late Beetle production. The fact remains though that, quite amazingly, there are still significant holes in the complete cataloguing of SEB production history.

More worryingly there are a couple of generations of Beetle owners that have been born since european production ceased and unintentional misinformation (or confused understanding) is  quite often passed on by word of mouth – or increasingly via social media and less informed publications. This is particularly the case with the subjects of Volkswagen type numbering and Beetle badging for Europe and the USA and Canada.

I was thrilled to find that Colin Shinkin had made a valiant effort in setting up the SEBeetles website in 2000 motivated by his love of the subject matter. This extensive work has done much to extend and correct the pre-internet recording of SEB history and is so much more accessible than any printed records in books or magazines. Moreover, it is accessible worldwide and grows iteratively as new information surfaces – often through the passionate and well-informed contributions to the Facebook Group linked to the SEBeetles website.

It is fair to point out also there are several other well-structured websites, themselves supported by Facebook Groups, giving excellent, detailed, information about specific SEB models. What the SEBeetles website does is provide an overarching contextual umbrella that embraces them and way-marks to them.

I am so pleased to now be able to contribute in small ways to Colin’s ongoing work on SEBeetles.com by way of assisting with his review, revision, and upgrading of the site and the information it provides to enthusiasts from all over the world.

In the UK we have a colloquial saying that likens some tasks as akin to painting the Forth Road Bridge. The inference is that no sooner is the painting of that massive metal structured road bridge completed that you have to go back to the starting point and do the work all over again. I suspect that upgrading the information on SEBeetles is much like that – even as I write this new information has just come through about details of 1970’s SEBs that were perviously unknown.

Some 45 years after my first sighting of that June Beetle and 34 years after first publishing a small article on the UK SEB’s it is an honour to have contributed to the next (massive) positive step to document the history of SEB production for posterity and the informed delight of Volkswagen enthusiasts worldwide.