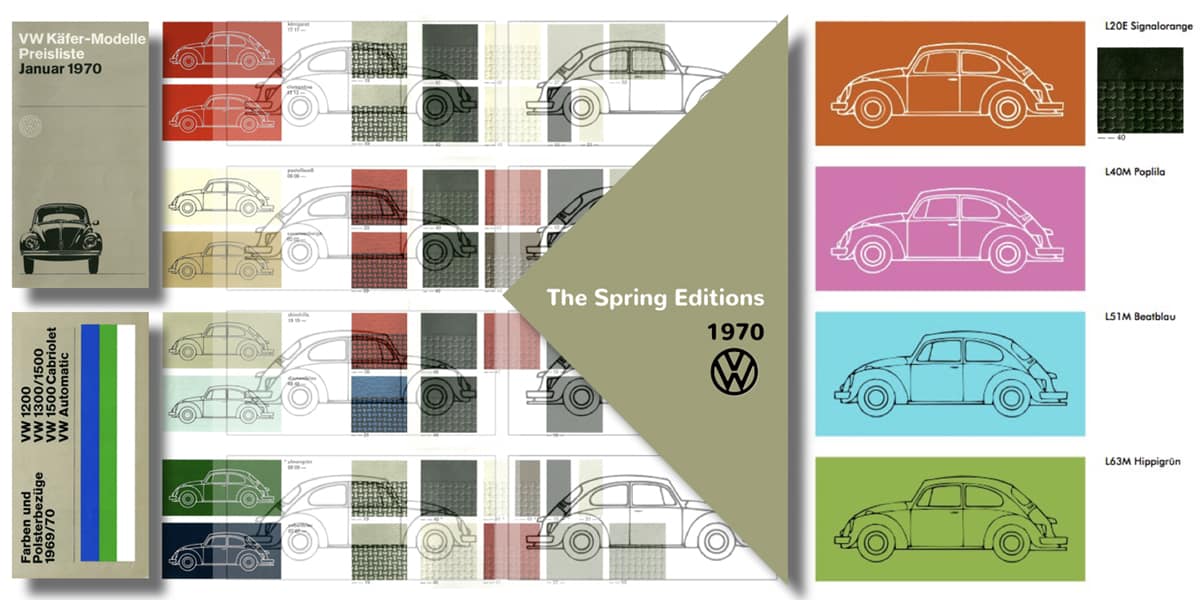 Context. The very first series of special sales campaign Beetles by Volkswagen in Europe manufactured in April 1970 three quarters of the way through the model year.

They were the forerunners of several successive “close out” sales campaigns intended to attract purchaser attention – and sales – in a period when customers were appearing to be treading water over buying a Beetle in the face of the possibility of more exciting things being unveiled with the new model year in August. In the case of the Spring of 1970, there was already substantial press speculation and rumour about the imminent appearance of an “all-new” Beetle. That of course arrived in August 1970 with a “VW_1302” badge.

Whilst quite a lot of information about the extent of this inaugural sales campaign remains “lost” we have, nevertheless, a significant amount of detail about some of the series.

From information published by the Dutch importer Pon’s Automobielhandel, we know that Volkswagen offered importers the opportunity of ordering “one-off” shipments from this very first special production for distribution through Dealership showrooms. The Campaign range comprised of two themes produced, in total, in four unique paint colours. The first theme comprised of a single, orange, Beetle. The second theme comprised of Beetles of a slightly different specification to the orange version painted in three unique “pop” colours.

Unlike later Edition series there appears not to have been an overall Campaign theme ascribed to this dual themed family of Campaign models by Volkswagen: we have therefore decided refer to them as “The 1970 Spring Editions”

Setting the pattern for most successive campaign Editions made in Europe during the 1970’s the Spring Editions were each finished in paint colours not normally available to Beetle purchasers.

The orange theme combined L20E Signal Orange with the contemporary VW black leatherette upholstery (40). The source of this bright paint colour was the to the palette of colours being used in the Karmann factory on the Volkswagen and Porsche models they were assembling and as such set a precedent for the source of many subsequent SEB paint colours. Signal Orange was one of several Porsche “signal” colours and forerunner of the bright mid-seventies “Sports” colours used by Karmann.

The “pop” theme was even more unusual in that it drew on three paint colours only ever found on a very limited number of Beetles through the early seventies. None of the colours ever appeared in any paint/upholstery combination brochures or on any factory orderable list accessible to the general public.

They were L40M Poplila, L51M Beatblau, and L63M Hippigrün. In some markets, these paint colours were combined with the standard, contemporary, fabric upholstery trim and in other markets with a special smooth finish Leatherette in pale Beige (M135).

At this stage of SEB production history, the factory production code for all four colours seems to have been linked into the coding normally reserved for factory orders of special series vehicle ranges such as the Police and other Emergency and Public Service vehicles. As such they do not, therefore, have the more familiar brochure/production paint codes supplementing the Lack code but “51” special paint series numbers instead of which, at present, we only know the full codes for two of the colours:

(all four paint colours were fitted with black wing/body panel beading instead of the usual contemporary practice of paint colour co-ordinated beading). 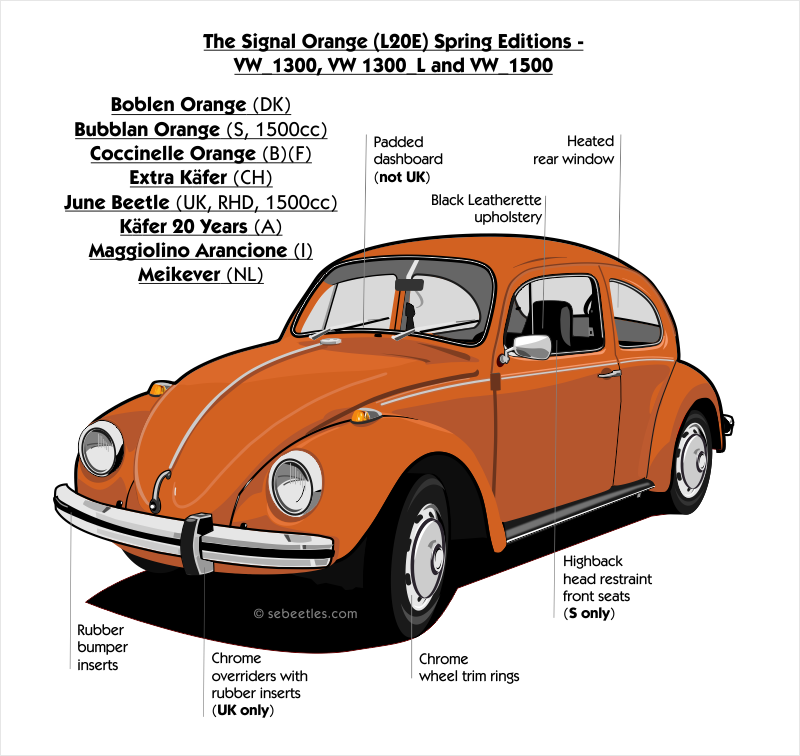 The Spring Editions were based on the following Beetles:

In all respects, the cars were technically identical to the contemporary normal series Beetles on which they were based.

(In addition to the known and verified versions listed below we believe at least the Signal Orange and Poplia versions may have also appeared in Pakistan as 1500cc typ.114 and 1300cc typ.114 respectively and typ.113 Poplia cars been available in Portugal.)

Additional factory installed options and accessories from the following list varied between recipient markets as described in the individual model profiles:

Although we are not completely certain some of the 1970 Spring Edition cars may also have been factory fitted with M616 Reversing lights integral in the rear lamp cluster.

Further Reading additional to the individual model profiles on this website: